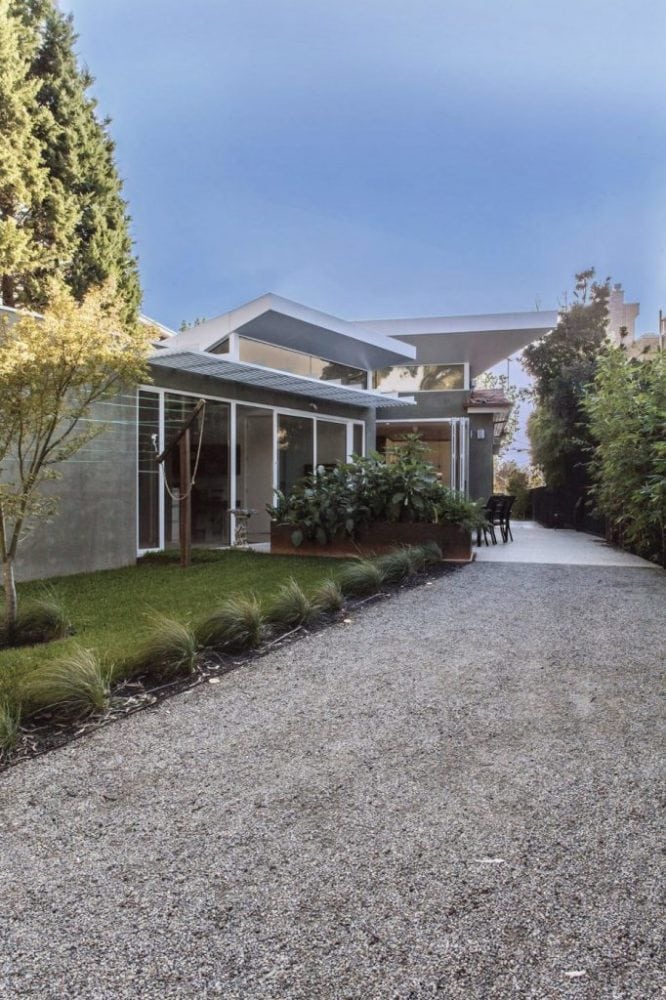 Two-Peaks House & Studio lies hidden in the leafy heritage surrounds of Elwood in Melbourne’s inner south, concealed from street view by the red brick proportions of the existing Edwardian dwelling , shielding a lush rear garden with tall pine tree hedge and two large palm trees in the far corner. Sustainability and sensitivity to the site were particularly important to the client, and this kicked off lengthy discussions of the precedents of Australian Modernism and the classic passive sustainable design principles of orientation, light, typology and spatial section employed so successfully by these architects.

Two Peaks Studio is a writers retreat set apart from the main house and reached across a small courtyard. Its geometry defines it formally and in section. Borrowing from precedent, it employs classic sustainable design formal and plan moves yet in an unmistakably contemporary manner; overhanging eaves, north-facing orientation, large north-facing glazing with pergola over, reverse brick veneer, highlight window glazing , exposed concrete slab and custom joinery and wall panels utilising rich red hues of timber veneer. The north-facing and courtyard pergolas / screens are modernised through the use of white aluminium. The windows are 2.7m tall and employ smaller sections than possible in timber, with drained sills and flush thresholds which help dissolve the boundary between inside and out. Finally, the geometries angle to moderate between a northerly orientation and parallel to the rear façade of the house, setting up an angled overhanging white eaves which defines the character of the studio.